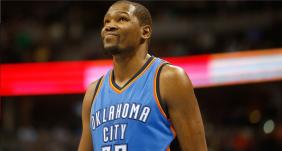 OKLAHOMA CITY -- Thunder star Kevin Durant had bone graft surgery Tuesday for a fracture in his right foot, and the team expects he'll return to basketball activities in four to six months.

The Thunder said in a statement that Durant had surgery at the Hospital for Special Surgery in New York, with team medical personnel present.

The league's reigning MVP had the third operation on his foot. The first procedure was last October, and he returned to play in December with some pain.

A screw rubbing against another bone was removed in February, and Durant was expected to return in one or two weeks. The pain persisted, and Durant consulted three foot and ankle specialists. They agreed to the bone graft surgery after it was determined pain was from the rubbing, plus regression in the initial break.

[RELATED: Thunder's Durant set for surgery, out for season and playoffs]

Thunder coach Scott Brooks said Durant has been like an assistant coach throughout the ordeal. He has been animated and involved on the sideline.

"It hasn't been easy on KD, but he has really established himself as a better leader than ever, because when you're not playing, it's hard to stay locked in and engaged on the team," Brooks said. "But he has done a great job of continuing to communicate with our guys and help our guys along."

Oklahoma City is in position to reach the playoffs without Durant. Heading into Tuesday night's games, the Thunder led New Orleans by 2 1/2 games in the race for the No. 8 spot in the Western Conference standings with 10 games left.

Brooks said he'll need Durant to motivate the team from the sideline.

Guard Dion Waiters has soreness in his left foot. He sat out Tuesday's practice, but he's expected to play Wednesday.