The Celtics are one of the top teams in pursuit of superstar free agent Kevin Durant.

And the team is pulling out all the stops in order to recruit the seven-time All-Star to Boston. 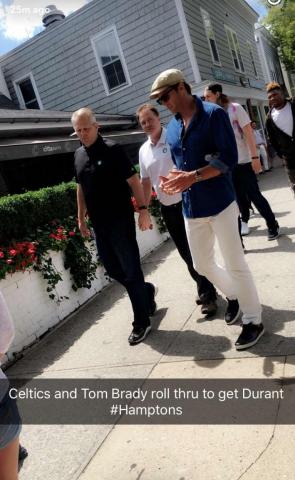 Durant in 2011 Tweeted his admiration for Brady.

Durant, however, followed up his takes on quarterbacks in 2013.

Aaron Rodgers still the best QB in the league

Confirmed -- per multiple sources. Tom Brady is at the Celtics meeting with Kevin Durant.

OK, a source who is present for the Celtics' meeting with Kevin Durant verifies that Tom Brady is indeed there in NY and part of the pitch.

A's Gray refutes that winless streak on mound bothers him

Is Melvin concerned by Gray's issues with wild pitches?

Earthquakes fall short to Fire on the road
Media Services

In old days, Bumgarner hitting vs A's would result in chaos, injuries