After serving a three-game suspension for hitting New York’s Rick Nash on Oct. 8 with what the league deemed as an illegal check, Stuart will replace the injured Dan Boyle on the right side of Matt Irwin when San Jose visits the Stars Thursday night.

The 6-0-0 Sharks will be looking for their seventh straight win. They’ve already made NHL history be becoming the first-ever team to start back-to-back years with at least six straight wins (per Elias).

[RELATED: In the Crease: Sharks vs. Stars]

“It’s almost like starting over again, I guess,” said Stuart, who missed all of preseason and the first two games with a lower body injury. “I’ll just try and do the same things I did in the New York game. Keep it simple and get back up to speed again.”

Stuart voiced his displeasure with the league’s decision to suspend him. Kind of.

“I could tell you what I really feel, but that would get me in trouble,” he said. “When it takes six hours to decide whether or not someone gets suspended, there’s something to that.” 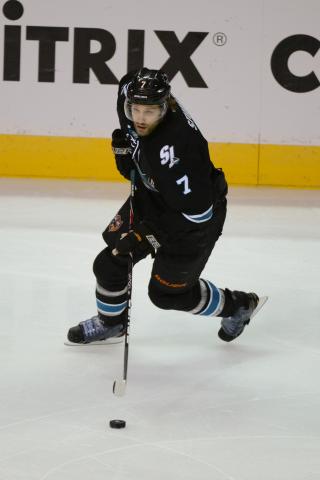 It was suggested to Stuart (shown, left), who hit Nash on his second shift, that he would try and avoid those kinds of plays moving forward.

“I’m not changing anything. No,” he said.

While the 33-year-old defenseman, who prefers to play on the right side, will replace Boyle during even-strength play, it’s Jason Demers who will take Boyle’s spot on the power play. After Boyle went down early in the first period in St. Louis on Tuesday, Demers was on the ice for two of San Jose’s three power play goals in the 6-2 win.

Look for him to remain on that top unit, with Joe Thornton, Joe Pavelski, Patrick Marleau and Logan Couture against Dallas.

“I’m excited. It’s going to be fun,” Demers said. “You never want to get an opportunity this way, but it happened and there’s nothing you can do. I’m going to try and do the best I can, work hard, get pucks to the net, move pucks, and do what I can do offensively.”

Todd McLellan said: “He understands the concepts, the breakouts, and what we’re trying to accomplish. We feel comfortable from that end of it, and I thought I St. Louis once Dan was gone, he did a very admirable job in that situation. We hope he can continue that.”

As for the opponent, the Stars made a significant overhaul to their roster in the offseason, brining in Tyler Seguin and Rich Peverley from Boston for four players, including Loui Eriksson. The front office was rearranged, too, as general manager Jim Nill and head coach Lindy Ruff arrived.

Seguin and Peverley, along with captain Jamie Benn, form a dangerous top line for the 2-3-0 Stars.

“They’ve been a very effective line, and they increase the tempo of the team,” McLellan said.

San Jose will try and avoid a letdown after the emotional victory against the impressive Blues, who had won each of their first four games before the Sharks came to town.

“Everybody was prepared, and up for it, and excited about it. Those same emotions have to come in to tonight’s game,” McLellan said. “For us to take our foot off the gas pedal or to relax would be a very dangerous thing.

“I believe our guys can approach it the right way. They’ve always given us trouble, they play a fast game, and they’ll be a hungry team.” 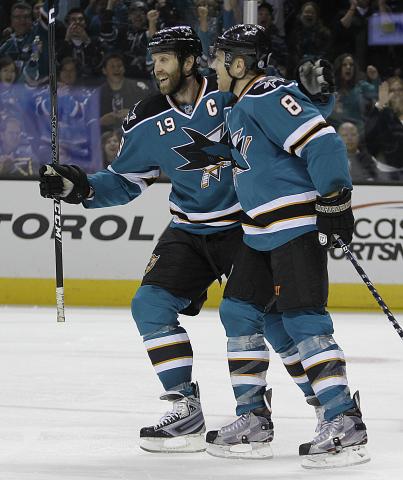 Antti Niemi was the first goalie off of the ice at the morning skate, signaling that he’ll start his seventh straight game. Backup Alex Stalock will have to wait at least one more night before his first start, which could potentially come on Saturday at home against Calgary.

Bracken Kearns will make his season debut on the fourth line in place of Matt Pelech.

Thornton (whown right) will play his 600th game with the Sharks. … Couture and Marleau are two of four NHL players who have at least one point in all of their team’s games so far. … Niemi will be looking for his 100th win with the Sharks.

In line image of Brad Stuart provided by USATSI; Image of Joe Thornton and Joe Pavelski provided by The Associated Press

Galiardi: 'I had a lot of good friendships over there'

Nieto: 'I'm adjusting; trying to build off each game'

Sharks look to button up defense vs. Flames
Former Shark Galiardi happy to be a Flame
Havlat rejoins Sharks; Boyle still recovering
In the Crease: Flames vs. Sharks
Read More

Ever wonder what happened to Thunder?
Warriors Rewind: The good (Iguodala) and the bad (Bogut's back)
Instant Replay: Warriors run past Lakers in Shanghai
Bogut leaves Shanghai game early with back spasms
Read More

Sharks look to button up defense vs. Flames
(3)
Kevin Kurz

In the Crease: Flames vs. Sharks

Ever wonder what happened to Thunder?
Casey Pratt

Warriors Rewind: The good (Iguodala) and the bad (Bogut's back)
(8)
Bogut leaves Shanghai game early with back spasms
See more >

Iguodala still getting a feel for new Warriors teammates

Sharks look to button up defense vs. Flames
(3)
See more >