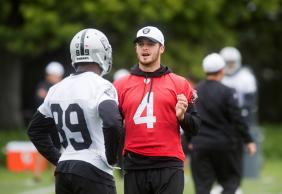 Derek Carr’s injury was always considered minor, both by the team and those around him.

That was reported by CSN Bay Area on Tuesday, shortly after the Raiders quarterback missed the team’s first OTA session.

There was good news then, and better news now. A league source confirmed on Thursday afternoon that Carr is not contemplating surgery on what ESPN reported as nerve damage in an injured right ring finger.

Carr is expected to start throwing again soon and will certainly be throwing without restriction well before training camp in July.

There is some optimism that he could return in time for Raiders mandatory minicamp, which begins on June 9.

Missing a few OTA sessions won’t be a big deal in the grand scheme, even with a new system being installed during the offseason program. Carr is a quick study and a film junky, meaning he shouldn’t be hindered by the on-field downtime.

“Time missed in May is better than time missed in September, for sure,” Del Rio said on Tuesday. “In fact, you’re often more capable of taking whatever time is necessary just to make sure you put things behind you. It’s a little more cautious this time of year.”

Carr started all 16 games as a rookie after being selected No. 36 overall in the 2014 draft. Carr was banged up at times during the year, but played well through various ailments.

Christian Ponder will continue to run the first team in Carr’s stead, with Matt McGloin and Cody Fajardo behind him. The Raiders next OTA session open to the press is slated for Tuesday.

Belt capitalizes on 'plan coming into this season'

Heston reveals 'huge part' of his success against Braves

Melvin: Got 'one big hit' we were looking for vs. Yankees

Rewind: For once, A's get it right vs. lefty
Instant Replay: Burns, Lawrie push A's past Yankees
Nostalgia kicking in for Melvin with Warriors
A's Notes: Kazmir injury not as bad as feared; epidural for Crisp
Read More

Rewind: For once, A's get it right vs. lefty
Joe Stiglich

Rewind: For once, A's get it right vs. lefty
See more >

Eleven things you need to know before NBA Finals begin