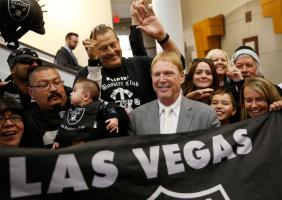 The prospect of the Raiders relocating to Las Vegas was not on the agenda during Tuesday’s NFL owners meetings in Charlotte, N.C.

There was, however, plenty of talk about the Raiders leaving Oakland for Sin City from commissioner Roger Goodell and owner Mark Davis in exchanges with the press.

Davis reaffirmed his pledge to move to Las Vegas if a $1.4 billion stadium proposal –- one without a set site, that needs $750 million in public financing -– is given a green light.

“It’s a new market, and it has the potential to be a really exciting market,” Davis told reporters. “It’s a neutral site that everybody has bought into. We’re excited about it. … It's going to unite the Raider Nation more than divide it.”

While Davis said he hasn’t given up on Oakland, his focus is honed on relocation prospects.

“I’ve given my commitment to Las Vegas,” Davis said. “If they come through with what they’re talking about doing, then we’ll go to Las Vegas. It’s not about giving up on something else. There are opportunities, but I don’t want to try and do two or three things at once. I’d like to give somebody the opportunity to get something done.”

Public financing for a Las Vegas stadium would come from taxes on tourists, and a special meeting of the Nevada state legislature would be required to approve it.

The Las Vegas Review Journal reported that a special session hasn’t been granted yet, and that there is some resistance to public financing from public officials. There are other projects in the region considered more deserving of tax dollars, but a Las Vegas stadium has some momentum in the region and among NFL owners.

While owners have talked about Las Vegas as a viable NFL market, commissioner Roger Goodell said in a press conference that assuming a Raiders move to Las Vegas is “premature.”

“There is not a proposal that at least Mark has presented to us,” Goodell said. “My understanding is there is not a proposal. There’s a great deal of work that needs to be done for ownership to make that kind of consideration. There are a variety of factors. The stadium itself, what the stadium proposal is, the market itself and market studies.

“We obviously, in Las Vegas, have been well documented that we’d have to consider the impact from a gambling standpoint. All of those things are an ownership decision and until we have more information it’s just pure speculation at this point in time.”

Davis believes the climate towards Las Vegas is warming, and that he’d get the three-quarters majority vote from NFL owners required to approve relocation.

Davis has commissioned studies on the viability of the Las Vegas market, and said that early returns are positive.

While the Raiders are actively pursuing Las Vegas, nothing much is happening at home.

Goodell said he spoke with Oakland mayor Libby Schaaf on Monday, and believes the NFL has been clear with the Raiders’ home market about what is required to keep the Silver and Black.

“We believe in that market. I know Mark Davis does, but there has to be a solution that’s developed,” Goodell said. “It’s not just on us, there’s got to be a cooperative agreement to try to find that solution. It’s been a long time coming, as you know. This isn’t something that started 12 months ago. This has been a long time that we have been seeking a solution in Oakland, and it’s time to get to that, and we will play our part, and I know the Raiders will also.”

An investment group, headlined by former Raiders players Ronnie Lott and Rodney Peete, has] spoken with the Raiders and Oakland about getting involved with an Oakland stadium project to help bridge a large funding gap, but NFL sources said any forward movement with that group is a long ways off at best.

The Raiders have long been frustrated with a lack of progress in Oakland, and have become enamored with the Las Vegas prospects. Goodell doesn’t believe that shows a lack of good faith after years without significant progress towards a new stadium.

Davis doesn’t feel the need to rush a Las Vegas move. He recently signed a one-year lease at Oakland-Alameda Coliseum that contains two one-year options after that.

Kruk & Kuip: Peavy makes most of 35th birthday on the hill

Span: Having mom in stands 'gives me an extra incentive'

Carr: Success by Warriors, Sharks 'something you strive for'

Carr not fond of fights in practice: 'Got to take care of each other'

After 103 minor league starts, Suarez to get first one in MLB
Alex Pavlovic

Cavs' challenge in rematch: How to slow, not stop, Curry
Associated Press

Kaepernick not cleared; Davis yet to apply for reinstatement
(48)
Matt Maiocco

After 103 minor league starts, Suarez to get first one in MLB
See more >

Kaepernick not cleared; Davis yet to apply for reinstatement
(48)
See more >

After Game 7 loss to Warriors, Durant not ready to discuss future
(14)
See more >