When Vivek Ranadive swooped in from Silicon Valley to buy the Sacramento Kings with an assist from Sacramento mayor Kevin Johnson last year, the sigh of relief from Kings fans -- some of the most ardent in the NBA -- dwarfed the refreshing delta breeze that residents clamor for when temperatures enter triple digits.

However, at last Friday’s Kings Media Day, “V” -- the moniker used in Ranadive’s inner circle -- didn’t issue a fiat … but he came close.

“Last year was not about wins and losses. This year is.”

When pressed by Comcast SportsNet California on what the specific number of wins was necessary to satisfy the owner, he replied, "Clearly we have to do a lot better than last year. Beyond that I don't want to make a commitment."

The Kings completed last season under Ranadive’s ownership -- with first year general manager Pete D’Alessandro and first-year head coach Michael Malone -- and tallied the same number of wins as the season prior to their arrival -- 28.

The numbers aren’t pretty, but there could be reason for hope in Sacramento.

That hope, however, partially rests upon two key questions...

Can Cousins take it to the next level?

DeMarcus Cousins possesses oodles of talent and could be on the cusp of taking his game to the next level as arguably the most talented big man in the NBA.

The Kentucky product, who averaged 23 points and 12 rebounds per game last season and won a Gold Medal at the FIBA World Cup on Team USA this offseason, has terrific hands, vision and passing ability in addition to his innate frontcourt skills. Talent, however, has never been the question with Cousins.

His maturation, though, is an absolute key to a Kings’ resurgence.

That he thrived with Team USA under Jerry Colangelo and Mike Krzyzewski with heralded teammates is an indication that he could be on the right track.

Can Kings hang on to the second cornerstone?

Cousins wasn’t the only King on the Team USA squad, after small forward Rudy Gay (20 PPG, 2.9 APG, 6.0 RPG) opted to stay in Sacramento for $19.3 million earlier this summer.

So there are two key pieces in place -- at least for now, as there’s no long-term deal yet with Gay, who he could opt for free agency after this campaign.

Thus far in camp, Gay has deferred talk about any potential extension to his management and the Kings front office.

Can Sacramento entice Gay to commit as the second cornerstone beyond this season?

While it’s easy to urge Malone to squash the “Whatever You Want” Tony! Toni! Tone! defense, there are a few things that are paramount that must be accomplished simultaneously (And yes, my listen count on “Whatever You Want” is way too high but let’s face it, it’s timeless).

The Kings have just five players in this year’s camp who were there last season (Cousins, Jason Thompson, Ben McLemore, Ray McCallum & Carl Landry), part of a squad that lost 16 games by six points or less and clearly had trouble at “winning time” -- when stops or buckets were needed down the stretch of games.

To fill the gap at “winning time” and cover for the loss of 20 PPG and six APG in guard Isaiah Thomas, GM Pete D’Alessandro -- focusing on ball security -- signed veteran free-agent point guards Darren Collison and Ramon Sessions. Last season, Collison backed up Chris Paul with the Clippers, who possessed the NBA’s best assist-to-turnover ratio at 4.5

Sessions, who toiled last season in Charlotte and Milwaukee, comes in with a solid reputation as a true professional, and excellent in the open court. He’s averaged 11.7 points and 4.7 assists per game over his seven-year career.

Just as important as the X's and O's are the Jimmy’s and the Joe’s.

With so many newcomers, establishing culture, identity, leadership and chemistry need to be paramount.

Collison agrees with the need for the team to coalesce.

“Leadership is so big right now for this team. We have some young guys on the verge of being really good. We have a chance of being special as the year progresses, whether it’s this year, next year. As the year goes on I feel like this team is going to improve and it starts with leadership.

“Guys have got to be outspoken. We gotta really speak our minds. Take whatever we learned from our previous teams, we gotta bring it back here.”

In the treacherous terrain that is the Western Conference, there is a lot of work to be done by the Kings.

However, there is recent precedent in the league for Sacramento to believe a turnaround is possible.

Phoenix and Charlotte were +23 and +22 respectively in wins last year in comparison to their previous campaigns. Defense was a cornerstone for the Bobcats, who went from 29th in the NBA to 4th in points allowed.

And a defensive plan is what Malone and the Kings will need to evangelize. He’s done it as an assistant. Can he do it as the head coach in his second season?

As an assistant, Malone’s defenses have shown promise:

So questions are looming for the Kings:

Is Cousins ready to take it to the next level?

Can Malone turn around this moribund franchise with better defense while simultaneously getting the offense to percolate with his “trust the pass” and “play for each other” mentality?

That lofty goal of returning to the glory days is not going to happen this season. But the modest improvement that Ranadive indicated on Media Day is now expected. 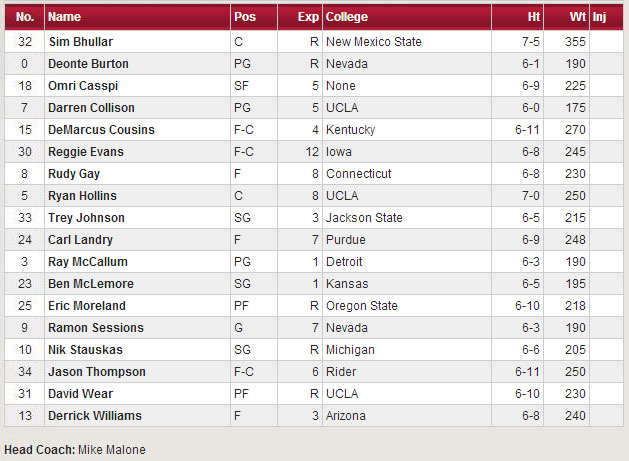 Hudson details how past success vs. Nationals will help him

YSTL: State of the Kings franchise in 2014

Warriors' Thompson poised to rise to another level
Monte Poole

Warriors' Thompson poised to rise to another level
See more >

Truth-telling is a bear, and recovering bully Wilson worked it hard