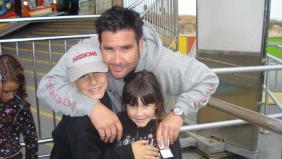 LOS ANGELES -- Jurors resumed deliberations Thursday after a judge told them to keep talking when they said they couldn't reach a verdict in the negligence lawsuit filed by a San Francisco Giants fan who suffered severe brain damage in a beating at Dodger Stadium.

The 12-member Los Angeles County Superior Court panel deliberated for nearly a week before telling Judge Victor E. Chavez Wednesday that it was unable to reach a consensus of at least nine jurors on the question of whether there was negligence by the Dodgers or former owner Frank McCourt.

The question is the first on the complex jury verdict form.

Chavez told jurors that they must answer the questions in order and sent them back to work. They then deliberated for about an hour Wednesday before going home.

Bryan Stow, a 45-year-old former paramedic from Northern California, was attacked by two Dodger fans as he and friends walked through a parking lot after the 2011 opening game between the Dodgers and San Francisco Giants.

He was knocked down from behind, hit his head on the pavement and then was kicked in the head.

Dodger fans Louie Sanchez and Marvin Norwood pleaded guilty in the attack after a lengthy preliminary hearing in which witnesses said security guards were not seen in the parking lot where Stow was attacked.

Medical experts testified that Stow will never work again and has suffered repeated strokes and seizures. They said he will always require around the clock care.

Noted personal injury lawyer Tom Girardi filed the lawsuit on behalf of Stow, seeking $37.5 million for his lifetime care and compensation for lost earnings. He also urged jurors to award double that figure for pain and suffering.

Dana Fox, the lawyer for the Dodgers and McCourt, argued that security was stronger than ever at an opening day contest and that the team and McCourt bore no responsibility for the attack.

In closing arguments, Fox showed jurors enlarged photos of Sanchez and Norwood and said they were responsible along with Stow himself.

Fox cited testimony that Stow's blood alcohol level was 0.18 percent - more than twice the legal limit for driving - and a witness account of Stow yelling in the parking lot with his arms up in the air.

Bochy or Melvin for the rest of the 2014 season?

Beane, A's beat teams to the punch for Samardzija

Beane, A's looking to exploit 'window of opportunity'
Tigers' Verlander: A's made trade 'because of us'
Angels acquire bullpen help from D'Backs
Samardzija trade has no impact on A's stadium situation
Read More

Fitzgerald: Cardinals' goal is to win NFC West
NFC West: Tyrann Mathieu running at '60, 70 percent'
Arbitrator sides with Saints, denies Graham's grievance
Tony Romo has given up golf to save his back
Read More

Tigers' Verlander: A's made trade 'because of us'
(1)
Angels acquire bullpen help from D'Backs
See more >

Samardzija trade has no impact on A's stadium situation