Pablo Sandoval spurned the Giants for the Red Sox this offseason, and a bitter follow-up regarding his former team elicited a response from ex-teammate Aubrey Huff.

"I'm pretty sure there wasn't a tear shed on behalf of all the players, and coaches when he signed with Boston," Huff wrote on Facebook, via SB Nation. "It has always been about Pablo! He had the fans fooled but not the players!

"Ego always will get in the way when it comes to Pablo!"

[RELATED: Kuiper: 'Feelings about The Panda not gonna change, but...']

On Nov. 24, Sandoval posted a message on Instagram that said, "To the greatest fans in San Francisco! Leaving the #SFGiants & this city I love is the most difficult decision I have ever made."

But on Monday, the 2012 World Series MVP contradicted himself.

"Only Bochy," Sandoval told Bleacher Report. "I love Boch. He's like my dad. He's the only guy that I miss. And Hunter Pence. Just those guys. But now, I feel like I'm home." 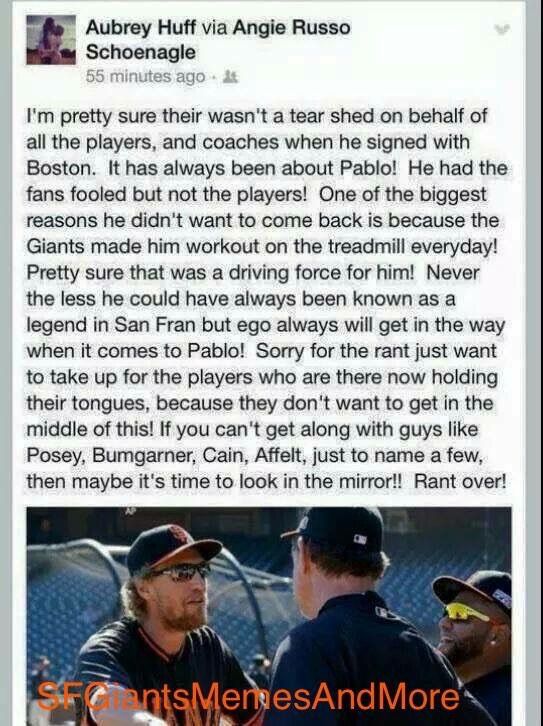 Warriors knock down 15 threes over second- and third-quarter stretch

Klay: Curry 'one of the best in the world at what he does'

Rewind: Sharks loss to Chicago not about being distracted
(3)
Kevin Kurz

Rewind: Sharks loss to Chicago not about being distracted
(3)
See more >

Sharks GM responds; beef with Thornton not going away

Bears trounce Cougars in opening round of Pac-12 tourney