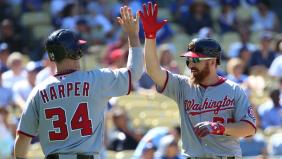 LOS ANGELES -- Adam LaRoche didn't start on Wednesday for the Washington Nationals, but he sure did finish.

LaRoche pinch-hit in the ninth inning and ended up with five RBIs in Washington's wild 8-5, 14-inning win over the Los Angeles Dodgers.

He hit a tying homer, a go-ahead two-run single in the 12th, and added a run-scoring grounder in the 14th that sent the Nationals to a hard-fought victory.

LaRoche was scheduled to sit out on Wednesday because of a strained lower back, but entered in the ninth and made an immediate impact with a homer to tie it 2-2.

"We had to use Adam even though we didn't want to," Nationals manager Matt Williams said. "He was huge for us, especially hitting that homer in the ninth."

Asdrubal Cabrera added a two-run shot in the final inning for the Nationals, who withstood two late Los Angeles rallies in a game that lasted 5 hours, 34 minutes - the longest at Dodger Stadium this season. Washington won two of three in the series, a potential playoff preview between NL division leaders.

All of LaRoche's RBIs either tied the game or gave the Nationals the lead.

LaRoche gave the Nationals the lead for good with a fielder's choice grounder in the 14th after an error by shortstop Justin Turner. Ian Desmond scored on the play, and LaRoche beat the relay to first to avoid a potential inning-ending double play.

LaRoche was also hit by a pitch on the left elbow in the 11th, but fought through the pain and stayed in. He wasn't/t made available to the media after the game because he was receiving so much medical treatment, according to team staff.

"Getting hit in the elbow there makes it really difficult for him to swing the bat," Williams said. "When we loaded the bases in the 12th he didn't know if he could swing. We were thinking about putting down a bunt, but he just stayed on the ball and hit a two-run single."

Cabrera added his two-run homer in the 14th, and Blake Treinen (2-3) finally made the lead stand up.

"It was fun to watch and just be a part of," Treinen said. "I really just tried to go out there and execute. Nothing fancy."

Washington used 10 of the 18 pitchers who appeared in a game that featured three blown saves.

The Dodgers rallied from a 3-2 deficit in the ninth and then a 5-3 hole in the 13th on Carl Crawford's homer, but ultimately came up short.

A defensive mistake in the bottom half forced extra innings.

With two outs and a runner on first, Nationals closer Rafael Soriano got Turner to hit a fly to right for what appeared to be the third out. Instead, right fielder Jayson Werth dropped the ball in the right-field corner for an error, and a surprised Andre Ethier raced home from first to tie it at 3.

"It was tough but Kenley has done a great job for us all year," Turner said. "We came back and scratched one out in the ninth and battled the whole game."

That's how it stayed until the 12th. A walk by Anthony Rendon and singles by Werth and Bryce Harper loaded the bases with one out. LaRoche then lined a single into left field to put the Nationals back on top.

Again, the Dodgers rallied to tie it. Tyler Clippard quickly retired the first two batters in the bottom half, but Juan Uribe singled and Crawford followed with a home run to left-center, whipping the remaining fans at Dodger Stadium into a frenzy.

"I think this was a good game for us," Dodgers manager Don Mattingly said. "The positive side of this is that the effort and determination and perseverance from our guys is going to get us where we want to go. Our guys fought all day."

Dodgers: Mattingly said it was "probably not very possible" that RHP Josh Beckett will pitch again this season. Beckett has been on the disabled list since Aug. 4 with a left hip impingement.

Mattingly added that LHP Paco Rodriguez threw a bullpen session with no complications and could begin throwing to hitters in the next few days. Rodriguez has been on the DL since Aug. 4 with a shoulder strain.

Washington is off on Thursday and then opens a three-game home series against Philadelphia on Friday. RHPStephen Strasburg (11-10, 3.49 ERA) is scheduled to start the opener.

Los Angeles is off on Thursday before beginning a three-game home series against Arizona on Friday. RHP Dan Haren (11-10, 4.27) will start the opener.

Allen: 'The guys are ready to go'