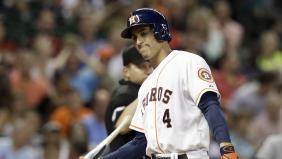 George Springer, who has spent the last three days on a rehab assignment at Quad Cities, felt something in his quad as he was legging out a double.

"(Springer) hit a double and kind of felt it in his quad so for precautionary reasons we pulled him out of the game," Astros manager Bo Porter said after Wednesday's loss to the Phillies.

Norris reveals hurdle Lester had to overcome during shutout

Donaldson: 'We know Lester is capable of doing that'

Kevin Durant withdraws from Team USA
Former top pick Oden arrested on battery charges
Richmond's induction reminds us of what might have been
With Love lost, pressure's on Kerr, Thompson
Read More