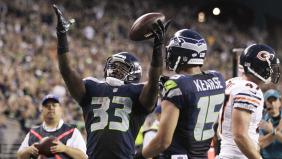 SEATTLE -- Seattle's defense is expected to be among the best in the NFL again. If Russell Wilson and the Seahawks' offense can play this well in the regular season, look out.

It's still just the preseason, but for the second straight week Wilson and the Seahawks weren't stopped.

Wilson threw for two touchdowns and ran for another score, helping the Seahawks rout the Chicago Bears 34-6 on Friday night.

The third preseason game was especially important for the Seahawks, who have just a week between their exhibition finale at Oakland and the season opener on Sept. 4 against Green Bay. And coach Pete Carroll couldn't have been happier with the continued efficiency of his offense.

"The entire offensive group is just executing at a good clip right now," Carroll said. "Russell is really committed to what is happening. We've got a really nice receiving corps where the guys are all making their plays and a lot of guys are contributing to it. ... We have good guys to go to, and they really believe in what we're asking them to do. I think we're just hitting at a pretty good clip right now. Hopefully we can keep it going."

Seattle scored touchdowns on its first four possessions, and Steven Hauschka hit a 59-yard field goal - what would be a franchise record in the regular season - on the final play of the first half.

Wilson was behind center for nine straight scoring drives, dating to last week's win over San Diego, a run of 55 points. It nearly reached 10 on the first drive of the second half before Hauschka's 53-yard attempt clanged off the left upright.

Wilson completed 15 of 20 passes for 202 yards, including scoring tosses of 12 yards to Jermaine Kearse and 7 yards to Christine Michael. He found Percy Harvin and Kearse four times and spread passes to seven receivers in the first half. Wilson also had a 7-yard touchdown run.

"I thought the way that we played tonight was exceptional," Wilson said. "We were in a rhythm. We were great on third downs. We were great in the red zone. We're really starting to put things together."

Marshawn Lynch got his first taste of the preseason with three carries for 16 yards and capped Seattle's opening drive with a 7-yard TD run before putting on basketball shoes and a baseball hat.

A week after rolling up 260 yards of offense and 24 points in the first half against San Diego, the Seahawks had 250 yards and 31 points versus the Bears. Seattle converted all seven third-down opportunities in the first half.

On special teams, Harvin returned the opening kickoff 46 yards, and the only grief was reserved for Earl Thomas who was caught by the punter on a 59-yard return that nearly broke for another Seattle touchdown.

"I was surprised he got tackled," Wilson said. "I'm going to pick on him tomorrow."

"It's still just the preseason," Thomas said. "We don't know if we got their best shot. You just try to stay low key and humble about it."

Chicago quarterback Jay Cutler played the entire first half and appeared to throw a 23-yard touchdown pass to Martellus Bennett late in the second quarter only to have Bennett ruled down at the 1 on review. Two plays later, after an offensive pass interference call on Brandon Marshall wiped out another touchdown, Cutler was intercepted at the goal line by Jeremy Lane.

Cutler finished 12 of 20 for 157 yards, and Alshon Jeffery and Marshall had four receptions. But the Bears' run game was again absent with just 21 yards on six carries in the first half.

"The good thing about it is that we are going to be able to make some corrections; we think a lot of this is fixable," Chicago coach Marc Trestman said. "And we'll do that and we'll be able to see how we are tied together in all three phases, because it was (clear) we lost the game in all three phases. That's a credit to Seattle."

Doolittle: 'That was a really important win to nail down'

Gray: 'There was electricity from the first pitch to the last'

What is taking Goodell so long with Smith decision?
Seahawks use big first half to rout Bears
49ers Quick Hits: Why the delay with Smith discipline?
Harbaugh: Williams looks better than pre-injury form
Read More

Joe Mixon: A star dims in an instant
College football's 25 most intriguing games of 2014
Stanford just outside Top 10 in AP Preseason Poll
DeRuyter among six football coaches on the rise
Read More

What is taking Goodell so long with Smith decision?
(7)
Matt Maiocco

Seahawks use big first half to rout Bears
(2)
49ers Quick Hits: Why the delay with Smith discipline?
See more >

Allen: Raiders passing problems 'not about one individual'
(18)
Scott Bair

What is taking Goodell so long with Smith decision?
(7)
See more >

Allen: Raiders passing problems 'not about one individual'
(18)
See more >

49ers replace sod at new stadium because, well, it stinks

DeRuyter among six football coaches on the rise