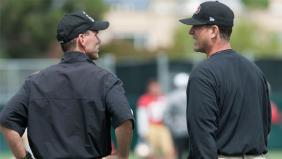 Wide receiver Chris Harper, waived by the 49ers on Thursday, was claimed Friday by the Green Bay Packers, the NFL announced on its daily transaction wire.

The 49ers cut Harper to create a spot on the 53-man roster, presumably to add a defensive lineman for Sunday’s game against the Tennessee Titans. With nose tackle Glenn Dorsey listed as questionable, the 49ers are likely considering adding Mike Purcell off the practice squad or activating Quinton Dial from the reserve/non-football injury list.

The 49ers plan to make the roster move on Saturday.

The 49ers signed Harper off the Seattle Seahawks practice squad on Sept. 2. Harper was a fourth-round draft pick of the Seahawks.

"He’s practicing now and (we) don’t have a crystal ball on exactly when he plays in a game, but it looks really good," Harbaugh said. "He had a very good day yesterday. I’m very excited for him.

Outside linebacker Ahmad Brooks, who missed the past two days of practice due to a family/personal matter, will meet up with the team in Nashville over the weekend, Harbaugh said. Brooks is expected to play in Sunday's game.

Galiardi: 'I had a lot of good friendships over there'

Nieto: 'I'm adjusting; trying to build off each game'

Sharks look to button up defense vs. Flames
Former Shark Galiardi happy to be a Flame
Havlat rejoins Sharks; Boyle still recovering
In the Crease: Flames vs. Sharks
Read More

Ever wonder what happened to Thunder?
Warriors Rewind: The good (Iguodala) and the bad (Bogut's back)
Instant Replay: Warriors run past Lakers in Shanghai
Bogut leaves Shanghai game early with back spasms
Read More

Sharks look to button up defense vs. Flames
(2)
Kevin Kurz

In the Crease: Flames vs. Sharks

Ever wonder what happened to Thunder?
Casey Pratt

Warriors Rewind: The good (Iguodala) and the bad (Bogut's back)
(8)
Bogut leaves Shanghai game early with back spasms
See more >

Iguodala still getting a feel for new Warriors teammates

Sharks look to button up defense vs. Flames
(2)
See more >