The race to credit the 49ers and general manager Trent Baalke for ridding the franchise of A.J. Jenkins took on breathtaking speed. The 49ers erred in drafting him, the 49ers fixed the problem by exchanging it for someone else’s problem – Kansas City’s Jonathan Baldwin – and so it goes.

Ignoring for a moment, though, the fact that this level of forgiveness is almost unheard of in any other city for any other first-round draft choice, let us consider another and more compelling reason why it was so easy for the 49ers to dump Jenkins.

It was the first big mistake in the Baalke/Harbaugh (or Harbaugh/Baalke) Era, and against the backdrop of 27 wins in 37 games and a near Super Bowl victory, it was the free one most general managers and coaches don’t get.

The next one won’t be so easy to fix, and it won’t be greeted so kindly.

It is the nature of all football things to regard as many players on the roster as possible as tool belt fixtures. A hammer breaks, you get a new hammer. Only the elite players are truly missed. 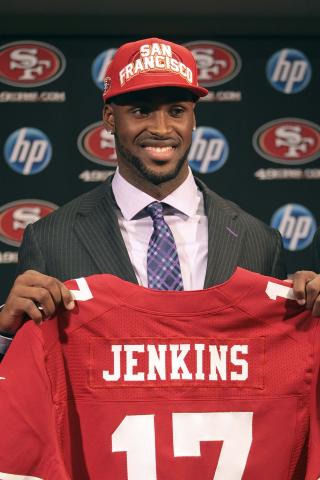 A.J. Jenkins wasn’t that, either by place or performance. He was regarded as a stretch at the time, and the only truly compelling reason for his notoriety was the strident defense head coach Jim Harbaugh made on his behalf a year ago. You remember it – it was Harbaugh’s first real “You know nothing of our work” declaration to the media, and it played poorly.

Of course, it was a risk Harbaugh cheerfully took, because that is how he operates – to defend and praise until it is time to make a pragmatic decision to discard. His words in the outside would are designed only for the outside world, while the players who have paid attention know that they are “trusted agents” only until they are not.

But Jenkins never was as Harbaugh claimed he was, because . . . well, just because. Even with all the science and technology, the NFL draft is closer to a crapshoot than a prophecy. It’s just that the league office has imbued it with powers well beyond their true value, and people have swallowed its year-round importance.

In addition, Jenkins wasn’t Harbaugh’s first first-round choice. Aldon Smith was the first first-round draft choice, made the year before, and he is a two-run homer, as mixed metaphors go. Plus, he was taken seventh, when mistakes are not tolerated, while Jenkins went 30th in Year Two, making his shortfalls more a curiosity than anything truly meaningful on a team-wide scale. 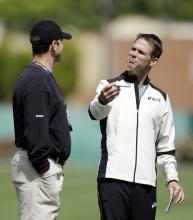 And maybe it will be in time. If it is the only high draft choice to bust so decisively. But it won’t be. Nobody hits on every one, and if the 49ers expect to be good awhile, they will be drafting late in the first round for that while.

In sum, trading Jenkins wasn’t a huge gamble at all, and may end up being the easiest decision Jim Harbaugh ever makes. The benign circumstances made it so.

[RELATED: Harbaugh: Trade is a fresh start for all involved]

But ego, track record, criticism, upper management and the ravages of time in football eventually get everyone in it. A.J. Jenkins was the first of what will be many mistakes by this franchise, not because it flawed but because it is a football franchise, and all management groups live and die by one basic rule.

It isn’t the first mistake that gets you, but the weight of the ensuing ones.

Wilson set to make $1 million if he shaves beard?

Watson only feels one or two days behind schedule

McFadden on pistol: 'We're gonna run it a lot more this year'

Might Colin Kaepernick turn into one of best QBs ever?

Kaepernick, Baldwin must click quickly
Jaworski: 'Kaepernick could be one of the greatest QBs ever'
Harbaugh re-emphasizes 'hands off' policy on Kaepernick
Source: 49ers show interest in QB Seneca Wallace
Read More

Menelik Watson returns to Raiders practice just in time
Veldheer vows to play: 'I have to get this thing right'
Raiders report: Team leaves Napa healthy as ever
Guy nominated for Hall of Fame
Read More

Will Giants call up Heath Hembree?

A's lineup: Crisp back up top for rubber match

Jaworski: 'Kaepernick could be one of the greatest QBs ever'
(26)
Harbaugh re-emphasizes 'hands off' policy on Kaepernick
(27)
See more >

Veldheer vows to play: 'I have to get this thing right'
(1)
Raiders report: Team leaves Napa healthy as ever
(8)
See more >

Guy nominated for Hall of Fame

Bears catching up to practice pace under Dykes