As it stands, wideouts Anquan Boldin and Torrey Smith are slated to start for the 49ers in 2015, but who will be featured as the No. 3 receiver is anyone's guess.

San Francisco has a deep group with no distinguished front-runner, but wide receivers coach Ronald Curry has his eye on Quinton Patton.

“Quinton Patton has always flashed,” Curry told the team's official website. “He’s going to get a real opportunity to go out there and see what he can do.

[MAIOCCO: 49ers in good health with training camp on horizon]

Patton had two receptions for two touchdowns in a single preseason for the 49ers, both throws came from starting quarterback Colin Kaepernick.

The third-year receiver also had a shining moment in the regular season when he made a leaping catch over Cardinals cornerback Antoine Cason to set up a game-winning field goal by Phil Dawson. 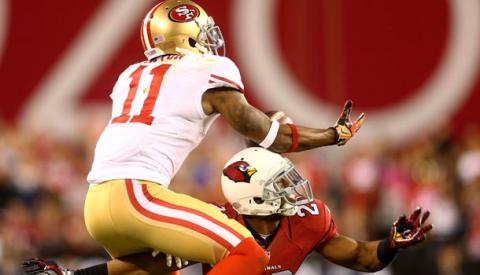 Patton, however, has only appeared in 10 regular-season games since being drafted in 2013.

When asked what Patton was missing in order to etch his spot in the lineup, Curry was straightforward with his answer.

Patton will be competing with Jerome Simpson, who was brought in via free agency, and South Carolina product Bruce Ellington, whom the team used a fourth-round pick on in 2014.

Patton, who was a fourth-round pick himself in 2013, starred at Louisiana Tech after transferring from JUCO.

The 6-foot-0, 204-pound receiver racked up 2,594 receiving yards and 24 receiving touchdowns over two seasons for the Bulldogs.

Patton has just six NFL receptions on 13 targets in 10 games played. He averages 13.0 yards per reception, and is yet to nab his first touchdown.

Belt details how he got back to 'normal self' at plate vs. Padres

Mayor Schaaf met with Goodell about new Raiders stadium
See what it's like to catch pass from Raiders' Carr
David Carr: Derek's 'confidence level is off the charts'
Five truths: Why Raiders will move to Los Angeles
Read More

49ers among worst in NFL at targeting running backs
(3)
Rotoworld.com

Kings' dysfunction a barometer of progress for Lacob, Warriors