Draymond Green is very demonstrative on the court and is known for wearing his emotions on his sleeves.

When asked if Draymond is being more pesky and annoying in the series against the Thunder, Steven Adams didn't hold back.

Midway through the second quarter of Game 2, Draymond took a rebound and dribbled down the floor.

He attacked the basket and scored on Adams. In the process, Adams was the recipient of a knee below the belt.

Draymond yelled "And one!" and appeared to have some words for Adams, who was bent over in pain.

Earlier in the game, Festus Ezeli went for a rebound and landed on Adams' back. It took a while for Adams to get up off the ground, and he walked gingerly to the sideline.

How is his body feeling now?

"It was painful, mate. Painful one," he told reporters on Friday. "Just trying to recover (smiling)."

"I won't name it, but I'm still a man," Adams answered as several media members laughed. "That's all that matters (chuckling). That's all I was concerned about. So that one's fine."

Steven Adams on Draymond Green being more pesky and annoying this series: "I think he's peaked with annoyingness."

Steven Adams on recovering from his rough Game 2: "I wouldn't name it, but I'm still a man." pic.twitter.com/Xr1CzSKZWX 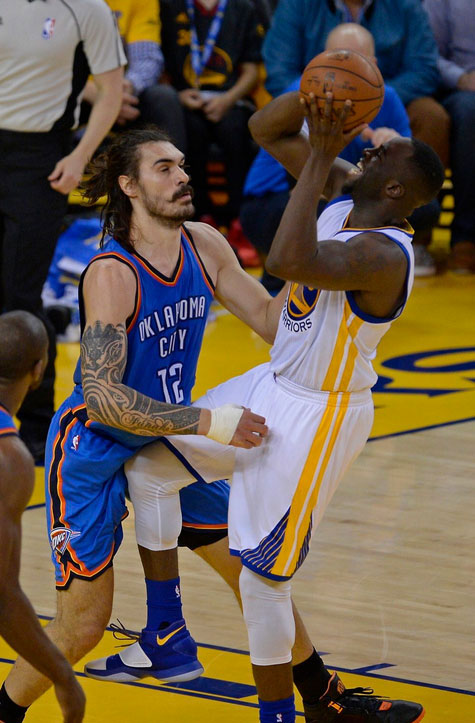 Rewind: Matt Cain finally gets back in the win column
(3)
Alex Pavlovic

Rewind: Gray's struggles 'not something I expect from myself'
(1)
See more >

Rewind: Matt Cain finally gets back in the win column
(3)
See more >

Ahead of Game 3, rebounding remains theme for Warriors vs OKC
(2)
See more >