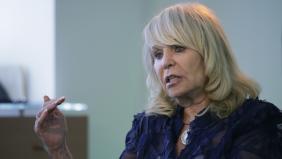 LOS ANGELES (AP) -- When asked how much money she wanted to sell the Los Angeles Clippers, the wife of disgraced team owner Donald Sterling handed a piece of paper to her lawyer with two numbers: $1.5 to $2.

What wasn't written was understood - she meant billions, shocking figures for a franchise that until recently was a perpetual loser. But Shelly Sterling soon brokered a deal to part with the team for a record $2 billion, selling it to former Microsoft CEO Steve Ballmer, a buyer whose name she did not know at first.

In an exclusive interview Thursday with The Associated Press, she offered details about negotiating one of the richest deals in sports after her husband's racist rant to a girlfriend prompted the NBA to ban him for life and force him to give up the team. That's when she stepped in.

For a half-century, Shelly Sterling had worked in her husband's shadow, renovating and decorating their real-estate properties while he built a business empire. Now she was the key decision maker at the center of one of the sports world's most closely watched transactions.

She hired well-known attorney Pierce O'Donnell, and prospective buyers started lining up. David Geffen made an offer of $1.65 billion, and an Egyptian princess also entered the bidding war, she said.

Ballmer called her at 7 a.m. on a Saturday.

"He was really enthusiastic," she recalled. "He said I want to come see you immediately."

She put him off until the next day and quickly called a girlfriend to find out who he was.

When they met, "he was a like a little child," she remembered. "He was so excited, so happy. We sort of connected. I felt he would be good for the team."

She said he asked her how much the other bidders had offered and then put forward his own figure - $1.9 billion. That was far more than most observers believed the team was worth, but Shelly Sterling wasn't satisfied.

"I told him: `You won't have to build an arena or a practice field.' So he was getting a bargain. And I told him, `We have great players, a great coach and you'll never have the chance to buy a team in Los Angeles again."

After her speech, she recalled, "He said, `O.K. I'll give you two.' He really, really wanted the team."

She said she extracted a promise that he would never move the team to Seattle, his hometown. The deal closed after a bitter probate fight with her husband.

Ballmer gave her the title "owner emeritus" and said she would have floor tickets for all games. She also gets three championship rings if the team wins an NBA title.

The negotiations put her in an unusually public role.

"I never liked the spotlight. I didn't like to get up and speak," she said. "But you don't know your potential until you're thrown into something."

She found herself in the middle of a publicity maelstrom with the release of explosive audio tapes of her husband denouncing his young girlfriend for bringing black men to Clippers games, including former Los Angeles Lakers star Magic Johnson.

She declined to discuss details about her legal battle with V. Stiviano, the woman who released the tapes.

"I think it was very unfortunate that she would have done what she did," she said, adding that Stiviano had "ruined our lives for our whole family."

Once Ballmer's offer was accepted, the drama moved to probate court. Shelly Sterling had removed her husband from the family trust, saying he was suffering from the early stages of Alzheimer's disease, which she first noticed about a year earlier "when he would call me sometimes and his voice would not be like usual."

Doctors supported her claims, but he insisted he was in full control of his faculties. When she tried to approach him in court, he growled, "Get away from me, you pig."

It was a painful moment in a 59-year marriage. She said he has since apologized. She blames his illness.

The marriage has had rough patches, she said, and the two have been estranged since the death of their diabetic son from a drug overdose last year.

She remembered their high school romance, when he crashed her 16th birthday party, and the years they spent building a real-estate portfolio of 160 apartment buildings in Los Angeles.

Asked if she knew her husband was unfaithful over the years, she said: "I can't say if I was blind to it or I didn't know to ask. I was raising my three kids, and I was very involved in taking care of the buildings ... There were always excuses that he was working with one girl or another. Maybe I didn't want to realize it."

She considered divorce but was told by lawyers that a split would be "of no benefit."

These days, she said, the two are "on better terms."

They try not to talk about the case, but they have a business together. "So we have to talk," she said.

Asked about his mental condition, she said her husband has been "a little better, a little sweeter and softer."

Losing the team "was very hard on him," she said. "But I'll always feel it's our team."

Harbaugh: I have great respect for Romo and his career

Kilgore on Dallas: There's no bad defense in NFL

Sharks Outlook: Hertl could be team's next superstar
(3)
Kevin Kurz

Sharks Outlook: Hertl could be team's next superstar
(3)
See more >