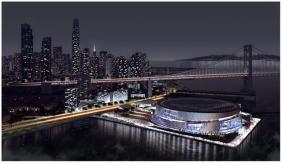 On Friday, Gov. Jerry Brown signed a bill that clarifies the process by which the Warriors may obtain approval for their new arena complex

The proposed arena would be located at the current location of Piers 30-32 in downtown San Francisco. Oracle arena, the existing home for the Warriors, is currently the oldest arena in the NBA, having opened in 1966.

Gov. Brown did not issue a statement regarding the signing of the bill, which gives Lt. Gov. and former San Francisco Mayor Gavin Newsom the last word as to whether the arena complex conforms to the current rules governing waterfront development.

The project is also expected to include the addition of hotels, retail stores, terraced plazas, condominium towers, and parking garages. In addition the venue will be equipped with a walkway, allowing the public to look through a large window into the new venue.

The project is expected to exceed $1 billion, but still has to hash out engineering and traffic impediments that include the addition of a new fireboat station, water taxi and ferry docks.

The Warriors’ current lease expires after the 2016-17 NBA season. If the organization would like a new arena by that time, there is a lot of business left to be done.

Harbaugh on Kap injury: 'We're complying with the rules'

Beane on Colon: 'It'd be foolish not to say we have interest'

Beane: 'We plan on having Coco back'

McFadden: 'If the game was today, I'd do my best to play'

What does the future hold for Balfour, Crisp, Anderson?

Tomas Hertl has made the entire NHL insane

Jackson on China trip: 'It's going to be a grind'
Warriors waive Cameron Jones
(4)
See more >

Optimistic Kings back to work in Santa Barbara

Edler to have hearing for Hertl hit
(5)
See more >