SAN JOSE -- Despite dealing with an abundance of injuries up front since the start of the season, the Sharks have managed to keep their third line of Joe Pavelski, Tommy Wingels and Matt Nieto generally intact.

While the coaching staff looks for the right player to jumpstart the Joe Thornton-Tomas Hertl line with Brent Burns still out, and tries to get previously injured Marty Havlat involved on a line with Logan Couture and Patrick Marleau, the Pavelski line has been left alone.

It’s easy to see why. Pavelski, technically the team’s third line center but who is also on the top power play unit and is a valuable penalty killer, brings a three-game scoring streak into Tuesday’s match against Buffalo. He’s tied for the team lead in scoring with Couture with 16 points, and on Saturday against Phoenix, he tallied the only even-strength goal of the game for San Jose, with Nieto and Wingels earning the assists.

[RELATED: Sharks look to clean up their game for Sabres]

What’s made that line work so well, Todd McLellan?

“I think they’re very supportive of each other,” he said. “The roles they play and how they play them make for a good mixture – Nieto with his speed, Wingels with his shot and abrasiveness, and 'Pav' being the mind on the line, if you will. They’ve been very good, they’ve been able to play against the other team’s top lines when asked, and also play a special teams role with penalty kill and power play.”

Pavelski said: “We’ve played a pretty simple game and a fast game. Nieto can fly around out there, and Wingels is tough. He holds onto it and he’s making a few more plays. That has to continue.” 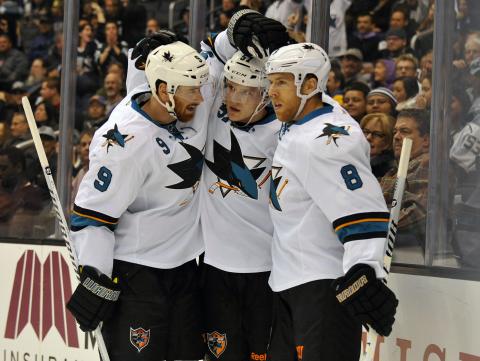 Wingels, who has three goals and seven assists for 10 points, is already just three points from his career high set last season in 42 games. Nieto has added six points (2g, 4a) after recently returning from a hand injury that had him sidelined for three games.

The 20-year-old has benefited from starting his career with the 29-year-old Pavelski, who is in his eighth NHL season.

“He makes it so easy for me out on the ice,” Nieto said. “He’s always in the right spots, he’s always talking to me, and he’s been a great guy to look up to so far.”

The line is also notable in that all three players are from the United States, prompting some to label it as the “American Express” line.

In fact, Saturday’s goal was the fifth time this season that the Sharks have scored a goal in which three American players registered points. Three of those five have been with Pavelski (Wisconsin), Nieto (Long Beach) and Wingels (Illinois) factoring in (the other two include a goal and an assist by Minnesota native Justin Braun).

Prior to this season, the Sharks had only scored six such goals in franchise history.

Gimmicky stats aside, though, the Sharks’ third line is representative of how the team wants to play.

“I just think our work ethic, and the speed of the line. … When we’re getting pucks out and playing in their end, that’s when we play our best,” Nieto said.

[RELATED: In the Crease: Sabres vs. Sharks]

A bare-faced Brent Burns skated for the first time with his teammates on Tuesday morning, as he recovers from an upper body injury. Burns hasn’t played since Oct. 19 vs. Calgary.

McLellan said: “I think that’s a great step. Getting closer, feeling better, back out there with his teammates. I didn’t know who he was when he came out because he doesn’t look the same. But, it’s nice to see him out there.”

Crabtree on rehab process: 'It's been a roller coaster'

Three and Out: Pryor returns to practice, Watson to make first NFL start

Wingels latest to get a look on Thornton line
Sharks react to blown goal call against Sabres
NHL cites 'intent to blow' rule in defending no-goal call
Missed goal aside, Sharks upset with effort in loss to Sabres
Read More

With qualifying offers made, Giants' rotation targets come into focus

Missed goal aside, Sharks upset with effort in loss to Sabres

Kings get 26 from Thomas, but lose to Hawks at home
Associated Press