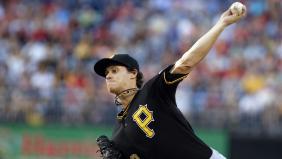 Kevin Frandsen, whose RBI single in the eighth started Washington's rally from a three-run deficit, went with the word "relentless."

No matter what you call it, these NL East-leading Nationals are showing a knack for coming through late in games, and their fifth walkoff win of the season came by the score of 4-3 against the Pittsburgh Pirates on Saturday night.

"When you're on a streak, when you've got a little lead in the division, it's easier to go relax and play," said LaRoche, who hit his 18th homer, "and not get too uptight late in games, regardless (of whether) you're down or not."

Trailing 3-0 heading into the eighth, Washington grabbed its fifth consecutive victory to stay six games ahead of the second-place Atlanta Braves.

The Pirates, meanwhile, dropped their fourth straight and have fallen to third place in the NL Central.

"It's never good for the club, especially the position we're in right now, pushing hard," said Tony Watson, who came on in the eighth and gave away the lead.

Watson began his appearance by walking pinch-hitter Michael Taylor, then giving up singles to Denard Span and Frandsen that made it 3-1. After a double play, Watson faced the lefty-hitting LaRoche, who drove a 1-0 pitch into the home bullpen. Reliever Drew Storen, who was warming up, caught the ball on the fly.

Watson said he followed the same pitch sequence against LaRoche on Saturday as he had Friday.

"Yeah," Watson acknowledged, "it was dumb."

In the ninth, with another lefty in for Pittsburgh, Justin Wilson (3-3), Bryce Harper checked his swing at a 3-1 pitch and went about halfway down the first-base line, figuring he had a leadoff walk. But plate umpire Mark Wegner had called the pitch a strike. Harper eventually paused, turned around, got back in the batter's box - and walked on the next pitch.

After Harper took second on a wild pitch, Ramos hit a ball that sailed over right fielder Gregory Polanco's head and bounced into the home bullpen to win it.

Helped, too, that Washington got four innings of scoreless relief after starter Gio Gonzalez allowed three runs and departed after 102 pitches in five innings.

Craig Stammen got nine outs - "Just carving," Harper said - before Matt Thornton (1-0) earned the win with a 1-2-3 ninth, getting a pair of strikeouts on 96 mph fastballs.

Pirates: CF Andrew McCutchen, last season's NL MVP, ran the bases and hit before Saturday's game as he works his way back from a broken rib that put him on the 15-day disabled list retroactive to Aug. 4. McCutchen had run before, but manager Clint Hurdle said "this was just a little bit more; closer to 100 percent." ... Hurdle said RHP Gerrit Cole "passed all the tests" during a minor league rehab start Friday and should be ready to come off the DL within the next week.

Nationals: RF Jayson Werth sat out a fifth consecutive game because of a bothersome right shoulder. Williams, who initially hoped to have Werth back Sunday, said the outfielder was "a little tender" after doing a full workout Saturday. "So if we have to take another day after today, we may have to do that," Williams said.

Pirates LF Travis Snider made a head-first, all-out, diving catch to rob Harper of a hit with a man on in the fifth.

Memorable visit for A's Doolittle to Travis Air Force Base

Sharks' outdoor game to be a celebration of hockey
(2)
It's official: Sharks will host Kings at Levi's Stadium
(1)
See more >

Raiders FB Reece to have MRI on ailing foot
(2)
Raiders' Carr: 'I'm starting to get a better feel for things'
See more >

Good as it gets for irrational need to hate Johnny Manziel

Stanford coach Shaw: 'We can't have a drop off'