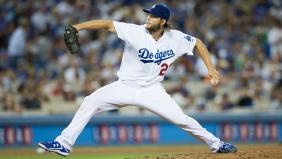 "I'm not really thinking about that right now," said Kershaw, who went 21-3 to lead the major leagues in wins and already has turned his tunnel-vision focus toward the postseason.

Kershaw became the first to lead the NL in ERA in four consecutive seasons since the Dodgers' Sandy Koufax strung together five years in a row from 1962-66.

"It says a lot about his work ethic and not being satisfied," said Magic Johnson, one of the Dodgers' owners.

Seattle's Felix Hernandez won his second AL ERA title, pitching 5 1-3 scoreless innings against the Los Angeles Angels and leaving about 10 minutes after the Mariners were eliminated from playoff contention by Oakland's win at Texas.

Hernandez started the weekend with a 2.34 ERA but it dropped to 2.18 Saturday when Major League Baseball Executive Vice President Joe Torre changed a hit to an error in Hernandez's previous start against Toronto, making four runs unearned. Hernandez finished at 2.14, besting Chris Sale of the Chicago White Sox (2.17).

"I was disappointed in my last start against Toronto," Hernandez said. "Today I had a different mind to go out there and do what I was capable to do, just throw strikes."

Originally left out of the starting lineup by the Astros on Sunday, Altuve talked his way in and went 2 for 4 against the New York Mets to win the AL batting title at .341. Altuve began the day with a three-point lead over Detroit's Victor Martinez, who went 0 for 3 and wound up at .335.

Altuve became Houston's first batting champion, leaving the Seattle Pilots-Milwaukee Brewers, Arizona and Tampa Bay as the only teams without at least one.

"I think this is way better than just sitting on the bench and waiting for something," Altuve said. "If you want to win something, you've got to win it on the field."

Morneau, who sat out Saturday, pinch-hit in the eighth inning and grounded out, leaving him at .319 - the lowest average for a batting champion in either league since Tony Gwynn hit .313 for San Diego in 1988. Pittsburgh's Josh Harrison was second at .315 following an 0-for-4 day against Cincinnati.

A year after serving a 50-game suspension for violating the major league drug program, Nelson Cruz hit 40 home runs for Baltimore and won his first AL home run title and the Orioles' second straight following Chris Davis' 53 long balls last year. Giancarlo Stanton topped the NL with 37 despite missing Miami's last 17 games after he was hit on the face by a pitch.

Mike Trout of the Angels had 111 RBIs, the fewest for an AL leader in a non-shortened season since Baltimore's Lee May had 109 in 1976. The Dodgers' Adrian Gonzalez led the NL with 116.

Milwaukee's Jonathan Lucroy set the season record for doubles by a catcher with 46, one more than Texas' Ivan Rodriguez in 1996. With 53 doubles overall, Lucroy became the first player who was primarily a catcher to lead his league.

Detroit's David Price struck out eight in the Tigers' AL Central-clinching win over Minnesota on Sunday to lead the AL with 271, two more than Cleveland's Corey Kluber. Cincinnati's Johnny Cueto struck out seven against the Pirates on Sunday to tie Washington's Stephen Strasburg for the NL lead at 242.

Kluber and the Los Angeles Angels' Jered Weaver shared the AL wins lead at 18 with Detroit's Max Scherzer, who led the majors in 2013 with 21.

Dee Gordon of the Dodgers led the NL with 64 steals and Altuve topped the AL with 56.

Moss: 'I wouldn't second-guess anything we did'

Postseason baseball brings out expert manager in all of us