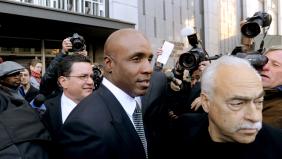 SAN FRANCISCO -- Barry Bonds may yet overturn his obstruction of justice conviction.

Several members of an 11-judge panel of the 9th U.S. Circuit Court of Appeals expressed skepticism Thursday over the sole count that baseball's career home run leader was found guilty of following a trial three years ago.

Circuit Judge William A. Fletcher called the prosecution's definition of obstruction "alarming" because Bonds ultimately answered questions before a grand jury about whether he was given drugs to inject himself with, an assertion he denied. Fletcher compared it with lawyers who evaded questions in civil litigation with the intent to mislead, and asked Assistant U.S. Attorney Merry Jean Chan whether that would be criminal behavior. Chan said she believed it would.

"So how many San Francisco lawyers do you intend to put in jail?" Fletcher said. "That is common behavior in civil litigation. Have you just criminalized half the bar here? ... I find your reading of the statute absolutely alarming, and half the bar, maybe three-quarters, maybe all of the bar is in big trouble."

A decision is not expected until next year.

During an hour-long hearing, Circuit Judge Susan P. Graber had similar skepticism for prosecutors' arguments that Bonds intended to mislead the grand jury, saying she doesn't see "there is sufficient evidence" because Bonds was asked and answered similar questions about drug use later during his 2003 testimony.

After a three-week trial in 2011, the jury failed to reach a verdict on three counts charging Bonds with making false statements when he denied receiving steroids and human growth hormone from trainer Greg Anderson and denied receiving injections from Anderson or his associates. Prosecutors later dismissed those three charges.

Bonds was convicted for giving a rambling answer to a question about whether he received injectable substances.

Bonds' appellate lawyer, Dennis Riordan, argued that Bonds' "unresponsive" answer did not constitute obstruction. He was immediately met with questions on his logic.

"One can mislead with the truth," Chief Judge Alex Kozinski said. "One can certainly mislead with irrelevant statements by leading a questioner into blind alleys, and isn't that why we have a jury? A jury was instructed. It heard arguments, and it concluded there was in fact a corrupt obstruction of justice here. Why don't we defer to the jury?"

Chan argued that Bonds had a "corrupt intent" in attempting to obstruct the grand jury with the rambling answer.

A three-judge panel of the 9th Circuit upheld Bonds' obstruction conviction in a unanimous vote last year, but a majority of the court's 28 participating judges voted to set aside that decision and have the larger group rehear the appeal.

Prosecutors asked Bonds during the grand jury appearance whether Anderson ever gave him "anything that required a syringe to inject yourself with?"

Bonds referred to his father, former major leaguer Bobby Bonds, when he responded, "I was a celebrity child, not just in baseball by my own instincts. I became a celebrity child with a famous father. I just don't get into other people's business because of my father's situation, you see."

Bonds answered "no" to similar questions later in his grand jury appearance, which Riordan argued was sufficient to cure any non-responsive answers. Some of the judges questioned whether Bonds had sufficient notice of what he was being charged with, since the third superseding indictment contained a broad obstruction charge and the specific statement was not included until the prosecution proposed jury instructions about a month ahead of the trial.

The three-judge 9th Circuit panel ruled unanimously in September 2013 that Bonds' testimony was "evasive" and capable of misleading investigators and hindering their probe into a performance-enhancing drug ring centered at the Bay Area Laboratory Co-Operative.

"The statement served to divert the grand jury's attention away from the relevant inquiry of the investigation, which was Anderson and BALCO's distribution of steroids and PEDs," Senior Circuit Judge Mary M. Schroeder wrote. "The statement was therefore evasive."

Barry Bonds has already served his sentence of 30 days of home confinement and paid a $4,000 fine. He was also placed on two years of probation and ordered to perform 250 hours of community service in youth-related activities.