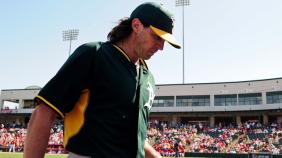 TEMPE, Ariz. – Despite enduring his poorest outing of the spring Tuesday, Barry Zito is confident he can be an effective major league starter.

How teams across the majors feel about the A’s veteran left-hander is unclear. Zito, who surrendered three homers and seven earned runs in four innings against the Angels, isn’t even sure what his short-term future with Oakland holds.

There doesn’t seem to be a spot for him with the A’s given how their pitching staff is taking shape, and Zito said he has yet to entertain the thought of going to the minors with Oakland. He was asked if he felt he could be effective in a major league rotation right now.

“Oh yeah, absolutely,” Zito responded. “I do. It’s just a bad note to end on because I’ve felt pretty good throwing the ball all spring.”

Zito will travel north with the A's for the Bay Bridge Series, but beyond that it's unknown. The A’s could look to trade him and see if they could get something in return. They could simply release him and let him pursue other opportunities. Or they could try to talk the 36-year-old into accepting a trip to the minors.

Regarding the Bay Bridge Series, there’s an option to pitch him in relief on three days’ rest Saturday at O.co Coliseum, a nostalgic nod that surely would be a crowd pleaser. It would also make for quite the storyline given that Zito spent a rollercoaster seven seasons with the Giants.

“Being on that mound in green and gold would be really cool,” Zito said.

He entered Tuesday riding an 11-inning scoreless streak spread over three outings, but that momentum hit a brick wall against the Angels. Zito served up three homers, all in the third inning. Former Athletic Collin Cowgill hit a curve over the wall to left to lead off the inning. Kole Calhoun homered to right two batters later, and two batters after him, Zito left a changeup up in the zone that David Freese crushed to straightaway center for a two-run homer.

His ERA jumped from 2.30 to 5.03 through six appearances (two starts). But in the big picture, Zito has shown a fastball that reached the high 80’s, better velocity than he had for much of his time with the Giants. His curve ball got sharper as the spring wore on and he also got better with his changeup. It’s that third pitch that Zito most wanted to improve after sitting out all of last season.

“I came here to get back to my original arsenal,” Zito said. “It’s felt good for the most part. Things have been fairly consistent day to day. It’s a shame to end it on this note, but I’m happy where I’m at right now.”

Baer, Giants trying to 'figure something out' with Barry Bonds
(6)
Alex Pavlovic

Baer, Giants trying to 'figure something out' with Barry Bonds
(6)
See more >