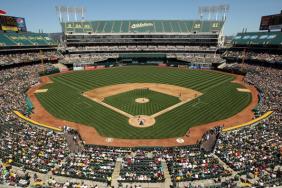 The City of San Jose's antitrust lawsuit against Major League Baseball concerning the relocation the Oakland A's could be headed to the Supreme Court.

The federal judge hearing the case ruled San Jose can take its appeal to the next step, which is the Ninth Circuit Court.

One of the attorneys representing the city expects justices with the Circuit Court will refer the case to the highest court in the land.

Sharks get their chance against rookie phenom Jones
(3)
In the Crease: Sharks look to end LA losing streak
(3)
See more >

VIDEO: Drawing up the the Warriors’ elevator screen play

Rodman arrives in North Korea on heels of political purge

Kings fail to defend Korver, fall to Hawks in Atlanta
Kings look to bounce back from ugly loss in Atlanta
(1)
See more >

Sharks get their chance against rookie phenom Jones
(3)
See more >

Spurrier's revenge on those who doused him with Gatorade