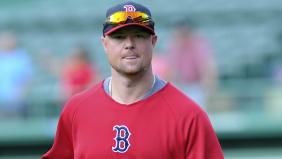 Programming note: For complete coverage of today's MLB trade deadline, stay logged on to CSNCalifornia.com and tune in to SportsNet Central tonight at 6, and 10:30 p.m. on Comcast SportsNet Bay Area

The A’s reportedly are receiving a modest portion of cash to help cover Lester’s remaining salary this season, and they’re sending Boston a competitive balance draft pick as part of the trade.

Not only have the A’s been a huge story in the standings this season, they’ve rocked the baseball world with their wheeling and dealing in July.

Just a week ago, it would have seemed unfathomable for them to throw their hat in the ring for Lester, one of the most coveted players on the market as Thursday’s 1 p.m. (PT) non-waiver trade deadline approaches. But some concerns in the starting rotation, in particular the shakiness of Jason Hammel, prompted general manager Billy Beane and his staff to go hard after Lester, the Sox’s 30-year-old ace who is 10-7 with a 2.52 ERA this season. The three-time All-Star will be a free agent after this season.

The A’s also get Gomes, the Petaluma native who was a fan favorite while with the A’s in 2012 and can help fill the void in left field created by Cespedes’ departure.

Ironically, the A’s just traded for Hammel (and fellow starter Jeff Samardzija) on July 5, another high-profile move that cost them top prospect Addison Russell but seemed to lock them in with one of the best rotations in baseball. But Hammel has lost all four of his starts so far with the A’s. Looking beyond him, Jesse Chavez has seen his performance dip over the past two months as well.

So the A’s made another extremely bold move in landing Lester, who is no guarantee to be wearing green and gold in 2015. It gives them a rotation headlined by Lester, Samardzija and 12-game winners Scott Kazmir and Sonny Gray. That’s a group that could be considered the best rotation core in the majors, and it ratchets up the expectations even more for a team that recent Las Vegas odds have pegged as the World Series favorites.

Shortly after news of the Lester trade broke, the A’s announced they dealt left-hander Tommy Milone to Minnesota and re-acquired Sam Fuld, who will help fill their void in center field with Coco Crisp and Craig Gentry injured.

Giving up Cespedes is a huge cost for the A’s given his presence in the middle of the batting order.

The two-time defending Home Run Derby champ is one of the most electrifying and physically gifted players in the game. Cespedes, 28, was one of six A’s players named All-Stars this season, and he’s hitting .256 with 17 home runs and 67 RBI in this third season with Oakland.

He signed a four-year $36 million contract in February 2012 after defecting from Cuba, and a clause in the deal allows him to become a free agent after next season, earlier than the normal six years of service time needed. He’s making $10.5 million this season and is due to receive the same next year.

There had been no indications yet that the A’s were looking to re-sign Cespedes.

The A’s are 228-131 with Cespedes in the lineup since the start of 2012, and 28-44 without him. But given how the A’s have thrived as an overall offensive unit this season, it stands to reason that they feel they can compensate for Cespedes’ loss with the bat. They enter Friday’s series against Kansas City leading the majors in runs scored.

Raiders Quick Hits: Woodson gets best of Schaub in practice

Jim Kozimor's 1-on-1 with Patrick Willis

Mueller motivated by Sharks’ ‘tomorrow team’ talk
Sharks Mailbag: What to do with Niemi?
(4)
See more >

Spurs' Ginobili out of World Cup due to injury
Associated Press

Beane can't use 'playoffs are a crapshoot' line now