The Athletics, who earned a Wild Card berth with an 88-74 record this past season, will play 15 of their 30 Cactus League games at 10,000-seat Hohokam Stadium, which was part of $26.9 million in renovations including the Fitch Park minor league complex in 2013-14. Oakland, which had trained in Phoenix since 1982, entered into a 20-year agreement with the City of Mesa on March 5, 2013 to train in the East Valley city beginning in 2015.

According to the Spring Training schedule released by the club today, the A’s and Giants will play seven times in the preseason, including the traditional three-game Bay Bridge Series in Northern California April 2-4 which will serve as the final tune-up before the regular season for both clubs. The Giants (March 3 and 14) and Los Angeles Angels (March 7 and April 1), both 2014 playoff teams, make two appearances at Hohokam Stadium this spring.

The A’s are offering fans a unique opportunity to secure spring season tickets in the inaugural year at Hohokam Stadium. Season tickets and group seating of 20 or more are now available for purchase.

In addition, the City of Mesa and the A’s will stage a team workout and open house for fans Saturday, Feb. 21, allowing a first look at the team’s new spring home with free admission. T 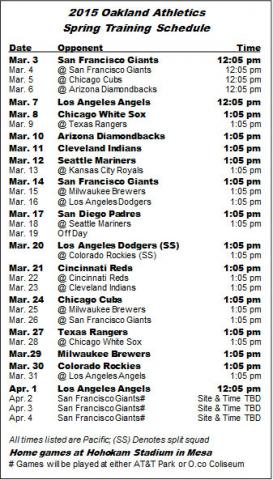 he team is scheduled to conduct workouts and batting practice while fans will have the opportunity to select a season seat.

This marks the second time Oakland has played its Cactus League games at Hohokam Stadium, as the team previously called Mesa, Ariz. Its spring home from 1969-78—a period in which the A’s won three straight World Series championships in 1972-74.

Pitchers and catchers report to Spring Training Thursday, Feb. 19 and participate in their first workout in Phoenix Feb. 20, while the remainder of the team reports Tuesday, Feb. 24, with the first day of full squad workouts Feb. 25.

Sandoval on future: 'Going to be tough moment for me'

Harbaugh transcript: Did 49ers RB Lattimore have setback?
DA: 'No decision has been made' on 49ers' McDonald
Rams-49ers Matchup No. 2: Robinson vs. Brooks
Ellington excited to see old friend Lattimore back on field
Read More

Sandoval: 'I'm going to do what my heart tells me'
Andrew Baggarly

Sharks will have their hands full on Wild's home ice
(12)
In the Crease: Sharks aim for perfect road trip in Minnesota
(1)
See more >

What they're saying: Klay gets paid by Warriors
CSN Bay Area staff

Sandoval: 'I'm going to do what my heart tells me'
See more >