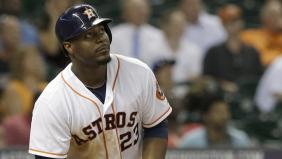 If he keeps hitting long balls at his current pace, soon it will be difficult to ignore that race.

Carter homered twice and drove in three runs, Collin McHughpitched into the eighth inning and the Houston Astros beat the Los Angeles Angels 4-1 on Wednesday night.

Carter has 35 home runs, and his seven multihomer games this season are a franchise record. It's the most homers by an Astros player since Lance Berkman hit 45 in 2006.

The designated hitter, who also singled, leads the majors with 22 homers and 52 RBIs since July 1. His 35 home runs rank third in the majors behind Baltimore's Nelson Cruz and Miami's Giancarlo Stanton, who have 36 apiece.

"It's still nothing I've thought about," Carter said of the possibility of leading the league in homers. "I'm just out there trying to have good at-bats. I just want to keep doing what I'm doing."

He was, however, happy about setting a franchise record, especially after he finished last year with 212 strikeouts, third-most in major league history.

"It's nice to have a good record this time instead of the one I had last year," he said with a laugh.

It was the second straight win for the Astros since manager Bo Porter was fired on Monday and replaced by interim manager Tom Lawless.

Carter put Houston on top 1-0 with his homer to the Crawford Boxes in left field in the second inning off Angels starter Jered Weaver (15-8).

"I thought he kind of mishit it, hit it off the bat, but he's strong as an ox," Weaver said.

Carter's two-run, opposite-field shot made it 4-1 in the eighth.

The first-place Angels lost both games in the series after sweeping the A's in a four-game set before arriving in Houston.

"Luckily, the A's lost a couple as well, so it doesn't hurt us too bad, but it would have been nice to get a couple of wins here and extend the lead a little bit," Weaver said. "Just have to keep trucking on and get another winning streak going."

McHugh (8-9) yielded four hits and a run with eight strikeouts in 7 2-3 innings for his fourth straight win, extending a career high. Chad Qualls pitched a perfect ninth for his 17th save.

Dexter Fowler walked with one out in the fourth and stole second with two outs. Jason Castro's single scored Fowler to put Houston up 2-1.

The Angels tied it at 1 in the third when Efren Navarro scored on an error by shortstop Jonathan Villar that allowedMike Trout to reach. The play pushed Trout's RBI total to a career-high 98.

McHugh retired the next 10 batters, with the next hit by Los Angeles coming on a single by Josh Hamilton with two outs in the sixth. Howie Kendrick grounded out to end the inning.

That was the first of six in a row set down by McHugh before he was replaced by Jose Veras.

Jose Altuve, who had four hits in each of his previous two games, doubled in the eighth to extend his hitting streak to 11 games. He has a major league-leading 194 hits this season.

Los Angeles right-hander Matt Shoemaker was selected American League pitcher and rookie of the month for August. He's the ninth player to win both honors in the same month and the first Angels player to do it since Trout received both awards in July 2012.

Angels: Manager Mike Scioscia said reliever Joe Thatcher (sprained left ankle) has been throwing off a mound and could pitch a simulated game in the next few days.

The Angels open a four-game series at Minnesota, with Hector Santiago opposing Kyle Gibson. ... The Astros are off Thursday before starting a three-game series in Oakland.

Get prepared for California's next damaging earthquake

49ers-Cowboys Matchup No. 2: Kaepernick vs. Wilcox
Martin could get nod to start 49ers' opener
(17)
See more >