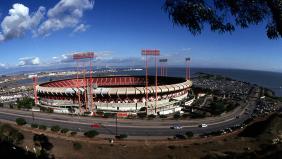 San Francisco Mayor Ed Lee on Monday unveiled the future of the now-defunct Candlestick Park, in what developers hope will be an "urban outlet" mall, featuring an African diaspora-themed market, movie theaters and 6,000 homes.

"I am overjoyed," Lee said at a news conference.

Candlestick Park, built in the 1950s, was decommissioned after the 49ers football team left the San Francisco stadium, nicknamed the 'Stick, for a new $1.2 billion stadium nearly 40 miles south in Santa Clara earlier this year.

Demolition of the storied venue is expected to begin this winter.

Carr: 'We have to continue to work on little details'

Sharks have some issues at quarter-point of the season
Rewind: Grosenick bails out lifeless Sharks in Carolina
Shot of the Game: Hertl scores in 2-on-1 situation
Instant Replay: Grosenick shuts out Hurricanes in NHL debut
Read More