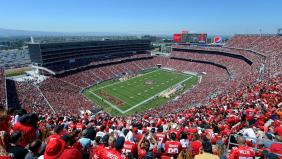 SANTA CLARA, Calif -- A man who suffered a heart attack during the 49ers' debut game at Levi's Stadium died Sunday.

The Santa Clara Fire Department said stadium staff responded to a cardiac emergency during the third quarter of the 49ers' 34-0 loss to the Broncos.

The man received CPR and was rushed to a hospital, where he was pronounced dead. His name was not released.

The 49ers issued a statement Sunday night offering condolences to his family and friends.

Thousands of fans left midway through the lopsided game played in 80-degree weather.

Memorable visit for A's Doolittle to Travis Air Force Base

Sharks' outdoor game to be a celebration of hockey
(2)
It's official: Sharks will host Kings at Levi's Stadium
(1)
See more >

Raiders FB Reece to have MRI on ailing foot
(2)
Raiders' Carr: 'I'm starting to get a better feel for things'
See more >

Good as it gets for irrational need to hate Johnny Manziel

Stanford coach Shaw: 'We can't have a drop off'