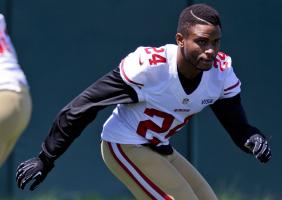 SANTA CLARA -- Cornerback Nnamdi Asomugha and running back LaMichael James are both listed as questionable for the 49ers' season opener on Sunday against the Green Bay Packers.

In reality, the 49ers expect Asomugha to play and James to be on the sideline.

Asomugha is expected to play most of the game Sunday as the No. 3 cornerback. Asomugha, who is nursing a left collarbone injury, took part in limited practice this week. Defensive coordinator Vic Fangio said the 49ers are confident he will be able to play.

James, who did not practice this week, is expected to miss multiple games with a sprain of the medial collateral ligament of his left knee. He sustained the injury in the 49ers' final exhibition game.

Asomugha and James are the only 49ers players listed on their injury report.

The Packers will be without Casey Hayward, the team's third cornerback last season, who has been ruled out of Sunday's game with a hamstring injury.

Cain had no doubts getting back on the mound

Bochy: 'We couldn't figure out McCarthy'

Cain solid in return, but gets little support
(3)
Associated Press

Petit proves he belongs with Giants

Balfour has A's in tenuous position

Stewart to attend Sharks camp on a tryout
(10)
Kevin Kurz

Boldin: Other receivers ready to make their marks

Raiders to use tight end platoon

Stewart to attend Sharks camp on a tryout
(10)
See more >

Bigelow leads Cal into Sonny Dykes era against No. 22 Northwestern