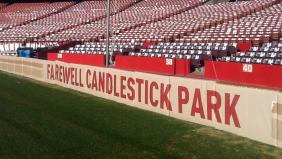 As the San Francisco 49ers played their last regular season game Monday night at Candlestick Park, beating the Atlanta Falcons 34-24, several fans were either kicked out, arrested and one was even hurt during the thrilling, bittersweet game.

Sgt. Danielle Newman said 81 people at the game were "ejected" from the stadium, 30 were arrested and 7 were cited. Some of the fans were drunk, she said, and there were some reported thefts of stadium property - such as the seats.

At least one person was reported injured during the game, but not seriously, Newman said. And other fans had to be turned away because they had counterfeit tickets.

Three and Out: Fullback by committee; Crabtree gaining steam

Curry on brother signing with Grizzlies: 'It's a good fit'

Magic get leading scorer Afflalo back vs. Kings